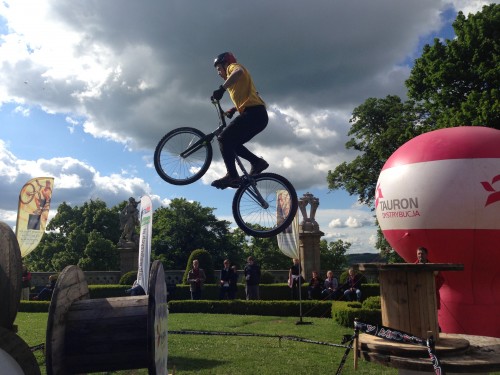 The main goal of the season is achieved, and Eirik Ulltang (23) did his best

result by far in the UCI Trials Worldcup in Walbrzych, Poland this weekend. On

the day one year after his worldcup debut in Belgium, the Team Betsafe athlete

managed to do a far better result this time.

Eirik rode quarter finals Friday 31st of May, and needed to get a 17th place or better to

reach the semi finals. With 30 of 60 achievable penalty points, he got 14th place, and

achieved his main goal in the second leg of the worldcup this season.

- To reach the semi finals was awesome. The work I’ve done since last year clearly

paid off. To be top 25 in a worldcup is beyond all expectations, and was only a dream

for me this winter, says Eirik.

At Saturday’s semi finals the level of difficulty was adjusted quite a lot. Since Ulltang

had achieved his big goal, his expectations was low. He tells:

- My first semi final didn’t go that well. I couldn’t keep my motivation, as I didn’t see

some of the sections as possible with my current level. This is of course a bad

attitude, and something I need to work on. I can do better!

Ulltang ended up at a 24th place in the end. This is 19 positions better than he did in

competing in biketrials at all.

The conditions were really hard in the semi finals. In five out of six sections, the

ground was covered in a 10 to 12 cm thick layer of mud. It was lots of rain during the

whole competition, which was something that influenced all of the riders. Ulltang

- Lots of rain is not unknown for me, as I’m from the westcoast of Norway. But, of

course it affects the motivation when you’re soaking wet, your brakes aren’t working

properly and the tires have no grip at all. This is no excuse though, and the conditions

were the same for everybody.

The next worldcup is from 26.-28. of July in Pra Loup, France. In the meantime there

will be a Norwegian Cup at the Extreme Sports Week at Voss, at June 26th.

For more information, please get in touch:

Hannes Herrmann and Abel Mustieles in Walbzrych by OD Films