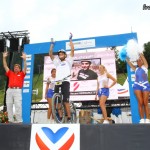 Ozonys has released pictures of their 2013 20-inch frame, the CURVE Hydrofemed. An excellent timing  for the French brand that has won two world championship titles in Pietermaritzurg: Abel Mustieles and Bernat Seuba and has a 20 inch runner up (world number 4) French Theau Courtes. After the Junior 26 inch title from David Bonzon… Read More »